Scott Layne and David Moulton established Moulton Layne P.L. in 2001 to provide exceptional architecture to a growing number of clients in Vero Beach, Florida. The firm is renowned for its unique style of crisp lines and dramatic visual focal points reminiscent of classic New England homes and the historic architecture of the British West Indies. 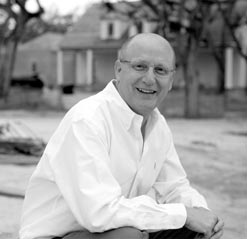 David is a licensed architect in Florida, New York and Connecticut. Prior to returning to Vero Beach, he was an architect in Manhattan with the firm of Skidmore, Owings and Merrill (SOM) from 1983 to 1991 and Daniel, Mann, Johnson & Mendenhall (DMJM) from 1991 to 1996.

Born in New Hampshire, David moved to the Moorings in Vero Beach as a teenager and attended Saint Edward's School. He lived in New York and Connecticut before returning to Vero Beach with his wife and son in 1996.

A native of eastern Long Island, Scott visited family in Vero Beach for many years before relocating here. After working for firms in Vero Beach and Palm Beach, Scott co-founded Moulton Layne in 2001.

Affiliations include National Council of Registration Boards, The Institute of Classical Architecture and Classical America, U.S. Green Building Council, Congress for the New Urbanism, and an associate member of the American Institute of Architects.